About usEditorial calendarAdvertise here
By John Mancini
Digital Workplace
The next wave of technology innovation will generate productivity benefits, but these benefits will not necessarily be equitably distributed.

The robots are coming. Whether actual physical robots, or software bots, an era of mass automation is upon us. So should we rush to greet our robot friends as allies in the battle against the drudgery of repetitive work or take to them with sledgehammers before they steal our jobs?

As usual, the headlines about the impact of AI and automation on jobs are crystal clear. Here’s a sampling:

What exactly is going on?

The answer, I suppose, lies in the law of averages. Put one hand under a heat lamp, the other in a freezer, and on average you’re comfortable.

Related Article: Why the Benefits of Artificial Intelligence Outweigh the Risks

AI: A Boon, a Bane or Somewhere In Between?

Your perspectives on automation are likely to be tinged by the nature of the work you do and for whom you do it. “The development of automation enabled by technologies including robotics and artificial intelligence brings the promise of higher productivity (and with productivity, economic growth), increased efficiencies, safety, and convenience. But these technologies also raise difficult questions about the broader impact of automation on jobs, skills, wages, and the nature of work itself,” wrote McKinsey Global Institute chairman and director, James Manyika in "Technology, jobs, and the future of work."

As usually occurs with innovation, productivity and job gains from the next wave of AI and automation will certainly be positive — on average. But while it is difficult to deny the productivity benefits that will be generated by the next wave of technology innovation, it does not necessarily follow that these benefits will be equitably distributed.

Andrew McAfee and Erik Brynjolfsson, in "Race Against the Machine" and in many other articles and books, have done great work highlighting the distributional impact of technology in a disruptive era: “… while digital progress grows the overall economic pie, it can do so while leaving some people, or even a lot of them, worse off.”

Kai-Fu Lee, former president of Google China, believes the distribution of automation benefits may provide some surprises: “The net impact will be that there will be a few winners and many losers. A small number of companies (AI companies, Internet+AI companies, AI SaaS companies, etc.) will make outsized profits, while others will struggle to survive. People in routine jobs will lose their jobs, and I believe only human-to-human service jobs are a sector large enough to accommodate them with some retraining.”

Related Article: Why AI Still Has a Long Way to Go in the Digital Workplace

As we think about retraining, let's consider the top four occupations in the United States, representing over 10% of total employment: 1) Retail salespersons; 2) combined food preparation and serving workers, including fast food; 3) cashiers; and 4) office clerks.

We’ve already seen parts of this short-term job disruption play out in conversations during the 1980s and '90s when the movement of manufacturing jobs overseas led to a number of plant closings. And while it makes long-term common sense to say many of the above jobs are simply unsustainable and that job skills must evolve to meet the next set of challenges, remember the suggestion that assembly line workers should instantly transform themselves into software programmers failed before and is unlikely to work this time around with the salespeople, fast food workers, cashiers and office clerks.

Related Article: How to Survive When the Robots Come for Your Job

It's Time We Ask the Messy Questions

On a recent trip to New York City’s new Hudson Yards complex (the one with the cool copper structure out front), I came across a small store selling bottled drinks that encapsulated many of the trends we are about to encounter at significant scale.

There was no staff or signage in evidence at this place, other than this one: 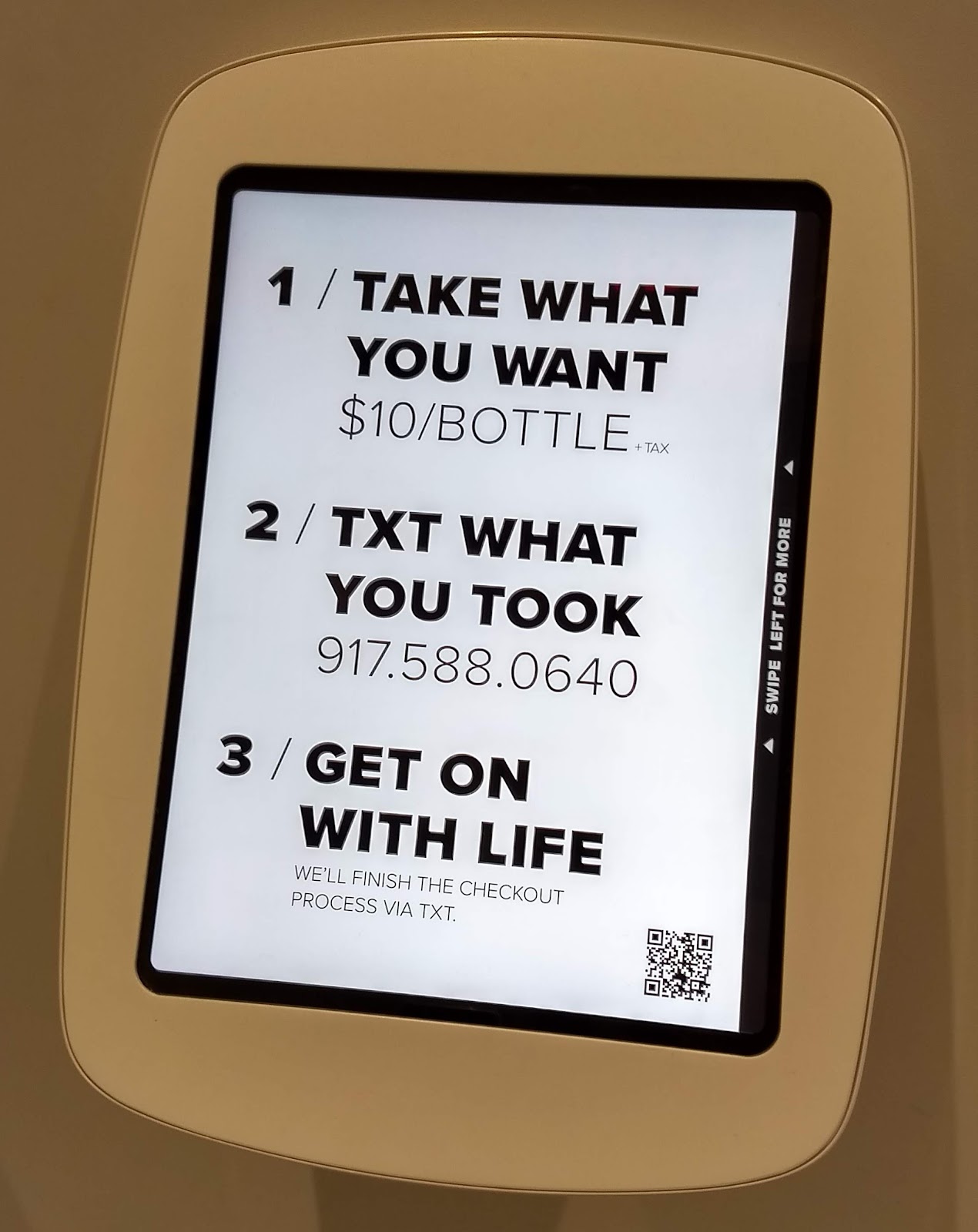 It was fascinating to listen to the other conversations in this little store. “Who is actually working here?” “How would they know if I just took a bottle?” “I wonder if THEY are watching me?” “I wonder if the bottles have a chip in them to track where they go?” “How do they actually collect money once they have your text number?”

These conversations are a microcosm of the unresolved questions that the fourth industrial age is raising — questions related to employment, security, privacy and financing. By their nature, these questions involve more than just pure technology. Many technology companies will need to move beyond technology and increase their involvement in these kinds of policy discussions. This is not comfortable turf for most technology executives. These conversations are messy. They involve more than technology. But with or without the presence and engagement of technology executives, they will be had.

John Mancini is the President of Content Results, LLC and the Past President of AIIM. He is a well-known author, speaker, and advisor on information management, digital transformation and intelligent automation.